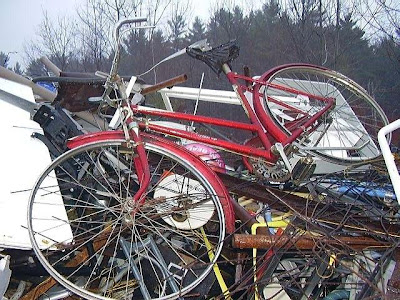 I got the bright idea of a "teaser" post from Alex over at Hank and Me with her new Bakfiets. This is a picture of the bike as found. It came from a town dump in NH! Why would anybody throw out such a beautiful and serviceable bike! Ticks me off more than a little bit. It was rescued by pastorbobnlnh a fellow Bike Forums member. He is more into vintage Schwinns, so it was passed on to me. It was rescued from his "magic" dump. That dump has produced more than a few nice bikes over the past couple of years including a nice Robin Hood that went to a new home in the Midwest.

But back to the Herc. I have finally cleared the project palette to the point that I have room on the workstand for it!

It is a 19?? Hercules Skyliner. The year has yet to be completely determined, it is probably between a 1947-1954, based on the paint, the name and the fact that Hercules was absorbed by Raleigh/TII in 1954. The bike has several unusual features: single speed freewheel and rod brakes being the two most outstanding. It was built at the Britannia Works in Birmingham, England...says so, right on the head badge. ;-)

Parts have been ordered! We hope to have it back together in time to take to the ABCE Tour in September. Stay tuned for updates!

Hi Myles,
Gotta love that old British Steel, about as close to indestructible as you can get in a bike.

Thanks for stopping by!

Thanks for your help. I have Sheldon Browns site bookmarked also. I have an early 2k +/- Giant Yukon. Rec mtb.
the drop outs are vertical. the rear cassette is 7sp. and my shifters are broke. ive tried to find new shifters but now they seem to be all 8sp. so its a hair dated. im already making due stuck in one gear so i thought what the hey! ive looked into shimano nexxus 7 and roloff but still undecided. I suppose ill go with affordable and functional. The bikes paid for and considering its a 16" which is just about the right size for me...ill stick with it. the dutch and dane bikes are bike too large. unless you are willing to help me break my legs and extend them a bit..ill go the easier pain (money too) free route. Any help will be appreciated considering the network of knowledge it'll all be as good as gold. thanks
oh and though my blogs suck you can see it at wsblogs.blogspot.com
ive added your site to the fast blogs which allows the reader to read your posts there.
also another cool older bike site is http://www.hetchins.org/504xc3.htm
works of art.
Thanks again for your help

Hi William,
Those Hetchins are gorgeous, but usually go for more than I am willing to spend.

I thought that it was intesting that the bike in one of the photos shows a small button on one of the cranks. That button shifted the gears. You'll see similar on some other of their bikes. That one was from the 50s. To me it was a total wowser! So tell, what makes these new bikes so special(and some costing 8k like Santa Cruz, Scott and Felt)?!