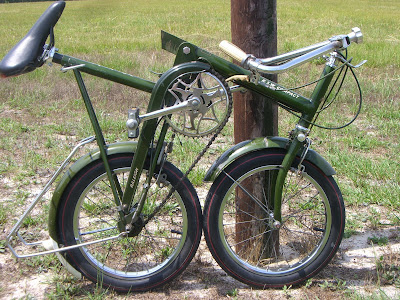 That is the typical reaction when people see this bike *big grin*
In reality it is a 1968 Raleigh Compact RSW 3 speed. It was Raleigh's answer to the Moulton after they had turned Alec Moulton's design down back in 1961. Alec Moulton secured funding and was quite successful.

Raleigh's answer was the Compact RSW you see above, they began production in 1965 and stopped around 1974 producing some 100,000 units. It was also made in a non folding version known as the Shopper Mk I,II, or III. It is a fun little bike to ride, but bloody heavy. It weighs almost as much as a full sized Raleigh Sports! The kids around my area refer to it as my clown bike...I wonder why. ;-) And yes at 6'-2" and 200# I can ride it just fine. I snagged this one off of Ebay after being tipped off by a buddy of mine.

For the tech specs: It has a Sturmey Archer AW 3speed hub, 16" Dunlop tires. Original tires were completely White as was the original Brooks Mattress saddle. The seat post and saddle are not OEM. The tires are Dunlop Redlines and were a suitable replacement. They also came with an optional dyno hub and fender mounted headlight. 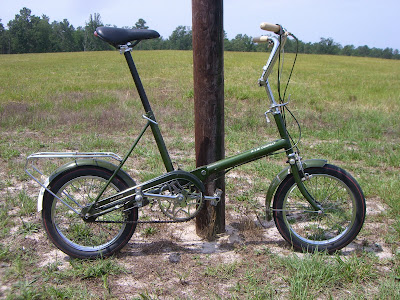 quite the nice snag and in such good shape! This will be worth millions in 10 years time!!! mwhahahaha *pinky finger at corner of mouth* :-p

Hi mindcaster,
Doubt it will ever be worth millions...but maybe again if the dollar REALLY tanks. LOL

I buy my bikes to enjoy not as some, for investment.

I was partly quoting Dr Evil :) Well, I tried anyway.

A collector AND connaisseur, gotcha :)