I am NOT addicted... 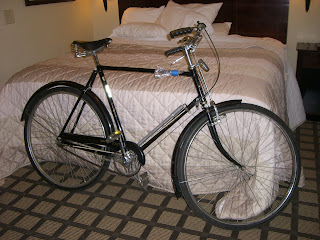 Really I don't have a problem and even if I did I would refuse to admit it! :-D

Here is my long awaited Raleigh Tourist complete with rod brakes. The bike is in amazing condition for being 30+ years old. A "buddy" of mine sent me a link to this one off a Craigs List ad in Davenport, IA, back in December. I live over 1000 miles away, so he negotiated and picked it up for me. I am working in Iowa City for a few weeks and was finally able to pick the bike up. It was advertised as a 1975 model, but is actually a 1979. That puts it near the end of the production of this particular model. IIRC it was phased out around 1984?

Very few upgrades planned for this bike, perhaps a full chaincase if I can locate one.

More pictures to come as I have time.

OK, so I'm not the only one who thinks a full chaincase would make a great modification to a bike that already has a chain guard!

So what's so great about rod brakes? You can get them on a "new" Flying Pigeon. My understanding is that with a little oil they last forever but have no leverage and therefore don't work very well at all.

Wow. Wonderful! I think rod brakes work wonderfully and with proper adjustment give you the same braking performance as caliper brakes on steel rims (which is not like cantis on aluminum, but that's like apples and oranges anyway). Plus, the look of rod brakes and the raw mechanics of the whole system are just so sexy. Want more pictures of this one!

Tom,
Rod brakes can be adjusted to work just as well as any other rim brake system on steel rims. FWIW I did a quick adjustment on the rear brakes on this bike and am able to skid the rear tire, it needs new brake pads, but the old ones aren't bad for their age.

These bikes were also sold with the chaincases, primarily in the UK. I have heard a variety of reasons why the US version didn't get them, from too much weight, customs regulations, to mechanics didn't want to mess with them.

More pictures when I get a chance...promise!

Yes! Finally you join the ranks : ) So what do you think of how it rides? You can get a full chaincase from Yellow Jersey. Congratulations!

It rides like a dream, it is amazing how easy it accelerates and maintains speed. I know about the YJ chaincases, but I hope to find a OEM one. I think I know where there is one ;-)

First order of business is to get a longer seat post!

The brakes on my DL-1 are just plain terrible, to be honest. When I get a truing stand I think I'm going to rebuild the wheels with new rims. The originals are so out of round that the brakes pulse badly.

Glad you're having better luck with yours so far.

Don't get me wrong, I love riding the bike, but I just have to plan ahead to stop- like, putting it in my appointment book! :-D

I think I got my seatpost at Niagara Cycle.

Doohickie, my front brake pulses a bit, but not enough to worry about. I grabbed a seat post at an LBS in Iowa City today, it is alloy but I will swap it out when I get home. I am going to order new Fibrax pads from Yellow Jersey. I am also on a the trail of a NOS OEM Raleigh chain case.

Welcome to the fold, indeed. I have a 1980 model with OEM full chaincase. It's the most fun I've had riding a bike since, well, I don't know when.

My rims pulse, too, but not badly. I found myself taking a sharp little hill (the downhill finish to stage three of the Amgen race, actually)and doing just fine by modulating between front and rear. I too have some new Fibrax blocks coming.

Thanks Corey K. So far the bike has been great and is a great addition to my stable. Managed to break the seat clamp last night so off on the Twenty to the LBS for parts.

Aaron- congrats! That is a beautiful bike. I love craigslist but, frankly, being limited to the local area is kind of restrictive, isn't it?. I live in Seattle, but extend my searches up and down the coast from Vancouver to LA. I have operatives in all the cities down the coast who will "do a buy" for me.

Addiction is such a hard word.... Does habituation sound any better? No, I guess it doesn't. =)

Great-looking bike! I don't have a Raleigh (yet), but being a pre-carbon kind of guy, I will sooner or later. My favorite bike now is my 80s lugged steel Lotus.

Hi Stranded thanks for stopping by.

I love the old British Steel, they were some of the most durable bikes built. There are plenty of old Raleighs out there waiting to be adopted!

You're NOT addicted? Forgive me if I have trouble believing that.

Nice bike! So you're addicted to bikes AND books? :) Thanks for the link you left on my blog for manybooks.net regarding the H.G. Wells book!

Hi Nick...bad news I have yet ANOTHER Raleigh, this one is a mid 80's Grand Prix that was given to me by the LBS. Not my size so it will go to some one that can use it.

Hi Traci...if you only knew ;-) it isn't JUST bikes and books, I also accumulate Airstreams and small boats!

I am also a bike lover and I particularly love to tinker with older 3-speed bikes.

I currently have a Huffy Sea Trails, and a Sears Free Spirit.

Bikes4RestOfUs on Twitter said you might be able to point me in a good direction to find parts for these types of bicycles.

Be well and thank you!

What type of parts? Most items like tires are readily available. Depending on the year of the bikes the hubs could be either Shimano or Sturmey Archer. Sturmey parts are still fairly easy to come by, Shimano not so easy.

They are Shimano hubs. The Free Spirit has the much-maligned 3CC, but we haven't had any problems with it.

I am specifically trying to find shifter levers that would be closer to original. I found shifting cables through a source on eBay, but have not been able to find levers like I'd like.

Shifters for the old Shimano 3speeds can be hard to find. I have actually bought bikes to strip for Shimano parts.

I have never had a problem with the 3CC hubs either, but they were all low mileage gently ridden bikes.

I don't know if any of the new shifters will fit or not. I know that an SA shifter won't work on a Shimano, different cable pull lengths.

3 notes,
my YJ chainguard installed on the DL-1 like a dream, MUCH easier than on my sports.

One commentator suggested new wheels might solve pulsing issues, but the quality of currently available westwood rims is so poor- I built a new wheel and it was nearly impossible to get it trued round.

A question- you say it rides like a dream- do you know what size cog it had? Mine was punishingly high geared with I think a 17T cog, which I swapped for a 19T IIRC. that made it manageable, but it's still a bit of a push to get it up to speed.
and I'll be sure to look for your son's new bike with drum brakes :)