They say the older you get the faster time passes...I must be at the stage where I am approaching warp speed! :-D

I have been meaning to post...HONEST! We took a vacation in Denver in June. No pictures the camera crapped out. But did get a chance to try their bike share and ride their light rail. Both were excellent.

Just got back from a week in Boston, lots to see and do. We used mass transit almost the entire time we were there, and walked the rest of the time. I even got pictures. Here is a picture I snapped out behind the State House. Appears to be a late 1960's early 1970's Raleigh Sport in good condition for its age. FWIW those are the original tires! 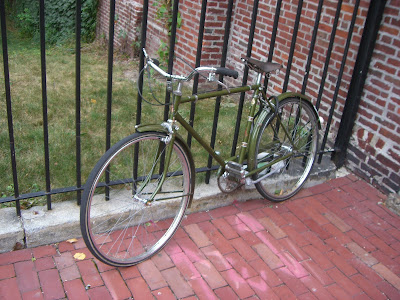 I have much more to report on in a bit. Including several bike builds and acquisitions.

Glad you're still with us, Aaron.

About the Raleigh/Dunlop tires... what's your favorite choice among today's tires for the authentic look for a Superbe or similar Raleigh?

There are several tires out there. I use Kenda on my Sports standard because they are cheap. I use Panaracer Col de la Vie on my Superbe. A lot of people like the Schwalbe Delta Cruiser, I have seen them in both creme and black and they look great. The both have the reflective strip on them which on the black mimics the stripes on the OEM Dunlops.

Thank you! Googling those right now...

I wish I could say I have no idea what you're talking about with the whole age/time passing quickly issue, but unfortunately I'm in the exact same boat!

Oh no, by acquisitions, do you mean that you've been feeding your bike addiction again? :)

I came across your blog recently. I wanted to ask if you would please consider placing a link to my website called Biking.com?

It is a resource for anything and everything bicycling, cycling and trail riding.

If you think it would be of use to your visitors, would you please consider adding a link to my website on your page. We are happy to offer you a 10% discount to our Biking Store if you do so.

Here is the HTML link you could add: Biking.com - the complete biking resource.

Please let me know if you have any questions.

Aaron, one more question if you don't mind...

How would you characterize the differences between the Superbe and the Sports? I have only one Sports, and it's a small one. I do have three Superbes, however, but not much basis for comparison.

is the Sports lighter?

The best way to describe the difference between a Superbe and a Sports would be "trim level". The Superbe had more options on it. The frames are identical and most cases so were the wheels. Yes the Sports should be just a bit lighter. My best guess would be 2-3 # at the most.

Superbes typically came with a B-67 saddle, locking fork, nicer paint jobs, upgraded tires (some years), they quite often included a dyno hub, head light, tail light, color matched rear rack and a saddle bag. These items would vary a bit from year to year. The Sports usually came as your basic 3 speed, sometimes with a vinyl mattress saddle other times with the Brooks B-72. It did not have the fork lock. However you could get the dyno hub upgrade and the color matched rack as options.