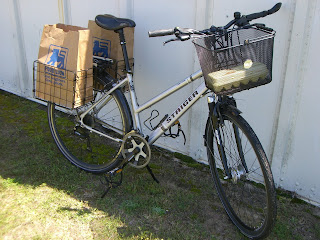 Buy a bicycle that isn't sold in the US and have to translate a German website.

Bought this bike off the used bike rack at my LBS . Someone apparently had brought it from Germany and traded it in on a new bike. It is a Staiger Florida. I find it interesting that Staiger would choose to name it's entire line of bikes using names from North America...undoubtedly one of the least cycle transportation oriented countries in the world.

The Florida was from their Trekking line, and comes well equipped, with fenders, generator hub, B&M lights, chain guard and bell (typical in the countries it is sold in, but not in the US). I bought it with the original intent of stripping the components for use on a different bike, but got to riding it around and decided to keep if for a beater/grocery getter bike.

The only items I have added to it have been: the Wald folding rear baskets and the Euro style Wald front basket I also swapped out the suspension seat post for a slightly longer non suspension one. The bike came with a plastic/lexan chain guard, but it broke at the mounting points and has not be repaired/replaced yet.

This bike, with it's 27 speed Shimano drive train, shies away from my normal IGH bikes but has been well worth the $175 that I paid for it. As best I can determine it is a 2002-3 model, and apparently sold originally for ~$650usd 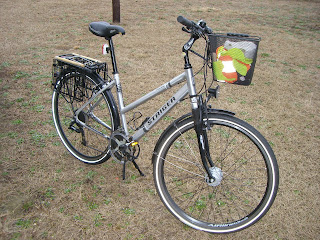 Slick. They probably named it Florida because it's a popular vacation place for Germans.

Do you live near a military base? I was just wondering how it ended up at your LBS from Germany. I like it. I've really grown to appreciate simple utilitarian bikes.

Yes I live very near, a very large military base. In fact the base surrounds my property on 3 sides. (Fort Bragg, NC) I am surprised not to find more bikes from Germany and other countries floating around here, because of the size of the base (45,000 troops and rising). I have lived in the general vicinity of this base off and on for the last 37 years and have seen plenty of gray market cars and trucks, but not too many bikes.

@spiderleggreen,
Hi thanks for stopping by. I wondered about the Florida name too, but their entire line up of 21 bikes are all named after North American states, provinces and cities. Shades of the old BMW Bavaria I guess.

It looks pretty normal for a German bike- I'm glad it's being appreciated...

The name is no suprise: American names are used quite a lot. Only today I saw a little garage in the next town called 'Montana Cars' I guess a lot of Germans find it exotic and cool.

Hi workbike.
It definitely is being appreciated. I have always had the European transport bikes. I have never understood the bike as a toy or "serious" sports syndrome. To me they have always been a form of freedom and transportation.